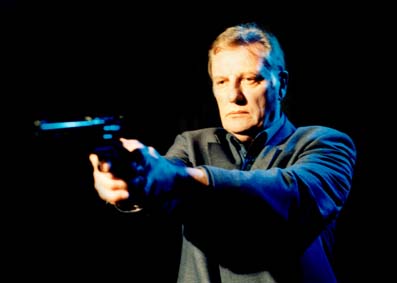 Paul Darrow is holding court. I don't think he means to, but Paul's a natural born entertainer and when - as now - he's surrounded by a group of people the impulse to entertain must become rather strong. This is when the stories, jokes and quips start flowing. Paul, tea in one hand, cigarette in the other, has been rattling off anecdotes for ten minutes now and his audience isn't showing the slightest sign of flagging. Neither, to his infinite credit, is he. The crowd he's charming aren't fans either. Not the sort of people who'd listen to anything said by anyone who was in Blake's 7 and/or Doctor Who. They're fellow professionals; actors, journalists and photographers.

It's a packed day here in South London's airy yet atmospheric Moat Studios and there are a lot of people here to do a lot of different jobs. Aside from producer/director Alan Stevens, director/technical God Alistair Lock and my fellow Production Manger Fiona Moore, there's more than one magazine delegation and an equal number of website people. All this on top of a pretty hefty cast call sheet for today-- and all of them without exception are listening to Paul recreate a conversation he once had with Alan Bleasdale. Reluctantly I break this happy band up; "Paul needs to go into the studio now," I inform the crowd, to a few audible sighs. Paul takes a big swig of his tea. "Must go and do some actual work now," he says apologetically, "Sorry loves." The last word is said in Paul's frequently-used "actor" voice. He isn't at all pretentious or "luvvie" himself, but he delights in pretending to be, calling people "dear heart" in a tone somewhere between Leslie Philips and Norman Wisdom. He grins at me as he puts his cigarette out and the throng begins to disperse. "Which scene is next?" he asks. I tell him. "I like that one," he shoots back, "I like the joke about tax deductions." He is - as ever - well prepared.

This is the third recording day for this block of Kaldor City, but it is Paul's first. A few days earlier, the same studio played host to a different group of actors, which included another former Blake's 7 star: Brian Croucher. Brian is a hard working, thoughtful actor who seems to manage the difficult combination of taking his work very seriously whilst not taking himself seriously at all. He often suggests line changes or subtle twists in interpretation, but never lightly, and when asked for his reasons, he's always thought them through. When recording a scene for "Hidden Persuaders" he comes up with an extra joke which Alan and Alistair don't want, as it will spoil something else three scenes along; having been talked out of his addition, Brian smiles ruefully and says "Tell you what, Al, I'll say it your way and think it my way, and then we'll both be happy." Cue much hilarity in the gallery. Brian has a lot of scenes with Trevor Cooper; their two characters, Cotton and Rull, work closely together and have done for a number of years. As at the recording for the first Kaldor City CDs a couple of years ago now, Brian and Trevor quickly strike up an on-mike rapport rich with weary affection and just a hint of malice.

Off-mike, Trevor is miles away from the bullish, paranoid character he portrays so successfully for us, jocular and wicked smart. During one of his breaks we discuss David Lynch's much-feted Mulholland Drive, a film we've both watched almost obsessively since its UK release earlier. This leads into an epic deconstruction of the politics of the Academy Awards; as Trevor has worked with many of the nominees, he is able to provide a fascinating insight behind the scenes. Trevor is currently in The Lieutenant of Inishmore in the West End, a brutal, blackly comic thriller that has made enthusiastic fans of Quentin Tarantino blanch. Trevor finds it pleasing that serious theatre is regaining the West End from the musicals, and is even more pleased to be involved in it. He's amused when I tell him of the months I spent feeling he was haunting me. Posters for his National Theatre success, David Edgar's Prisoner's Dilemma, were virtually omnipresent on the walls of my local tube station. Everywhere I turned pictures of Trevor in military fatigues pointing a gun at a kid's head seemed determined to swim in front of my eyes. Trevor also teaches drama and disarmingly explains that the kids he comes into contact with are only ever impressed by one thing on his huge resume - Doctor Who. "The fact I helped to kill a Dalek seems to overshadow everything else on my CV," he laughs, but he doesn't seem to mind. The news that "Revelation of the Daleks" will be released on DVD in 2003 pleases him enormously. Later, back in the studio, Trevor is forced - much against his will, I'm sure - to play a lengthy scene whilst eating a packet of biscuits. Crumbs go everywhere. Alan really enjoys recording this scene, as it's something he's wanted to do since at least 1995. "Another ambition bites the dust," he comments later.

The award for most dedicated actor in Kaldor City almost certainly goes to living fan legend Peter Miles. Peter's worked three days on Kaldor this time round, and is - as always - buzzing with enthusiasm for his work. Peter especially enjoys his scenes with Russell Hunter's Uvanov. On-mike paranoia and power-wielding come easily to both men although - as with every show business cliché ever - they are nothing like their characters in real life. Peter and Russell effortlessly make the relationship between the two political and social rivals, Uvanov and Landerchild, work, digging out levels of subtlety in the most innocuous of lines, suggesting the rhythm of a discourse going back years. A funeral scene catches Peter's attention and he slips a couple of unscripted sniggers into mock-mournful dialogue. It's a twisted delight.

Back to Thursday, back to Paul. Mr Darrow is recording one of the most pivotal, vital scenes in the whole of Kaldor City it is - hopefully - our "Rosebud", if you see what I mean. It's not an easy scene to do, at least partially because one of the other actors in it isn't in studio with him at the time. Paul nails the dialogue down with startling speed, spiralling from anger to weariness and back again. It's got power and punch and life. "Could you explain the scene to me?" asks Alan, curious to know Paul's interpretation of what's going on. Darrow tells him. Alan's eyes widen; he flips the talkback off and leans over to Alistair, "Smart guy," he says with a nod, "smart guy."