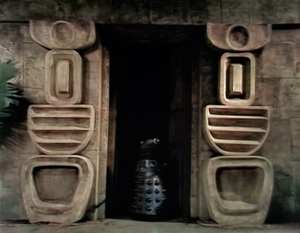 Watching "Planet of the Daleks" recently, I noticed that on either side of the entrance to the Dalek city there were two identical carvings that resembled Dalek eyesticks (see figures 1 & 2). The story tells us that the Daleks built the city, and, although it seems fair to assume they enslaved the native Spiridon as a work force, the construction would have followed Dalek design plans. 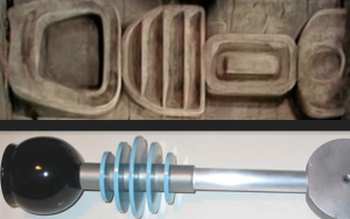 As part of the show's tenth anniversary, "Planet of the Daleks" borrows heavily from Sixties Dalek adventures, even down to mirroring the jungle tracking-shot that appeared on the Tardis' monitor screen during the very first Dalek episode "The Dead Planet". Both sequences are in black and white, which, again, indicates a conscious mimicry, especially as "The Three Doctors", from earlier in the season, had featured a Tardis monitor with a colour screen.

Equally, as a piece of Dalek 'modern art' (see figure 3) also appeared in this first story (only to be dropped down a lift shaft), it seems obvious that the two flanking 'eyestick' carvings were intended as a further callback. Intriguingly, another piece of sculpture, seen during the tracking-shot and then encountered by Jo Grant when she ventures outside, has some form of alien script engraved upon it. (See figure 4). 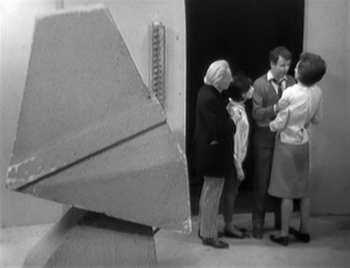 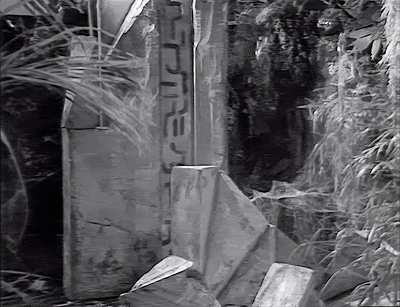 Finn Clark, author of Easy Dalekese, a book that explores the Dalek language, says of the lettering, "it could easily be Dalekese, but they'd be characters I haven't documented yet. The style fits quite well, although only if you assume that it's been rotated through 90 degrees. However, as I missed that bit of writing in my trawl through the available material, that's the best I can do. Of course, it could just as easily have been written by the Spiridons..."

If it is Spiridon script, it raises the possibility that they too were into modern art, making it unclear whether we are meant to believe the 'eyestick' carvings prefigure Daleks thought, or Spiridon. Evidently, the utilitarian design of the city interior (see figure 5), with its cold blues and greys, is intended to reflect the Dalek mindset, although the fact it is more spacious and bears no resemblance at all to the Dalek-centric city design seen in their first adventure (see figure 6), would suggest some thought has gone into building a structure that would also accommodate the Spiridon slaveworkers. 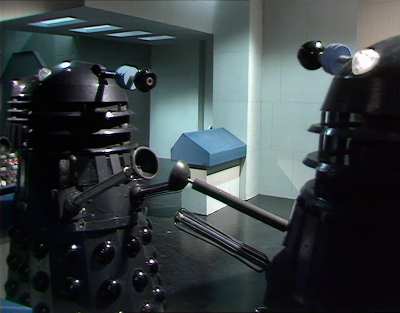 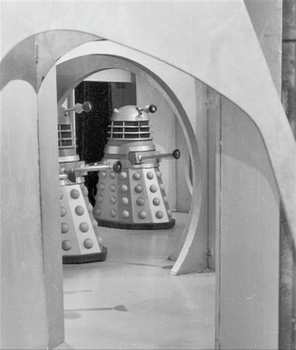 Of course, in the real world, BBC designer John Hurst sought inspiration for the Dalek sculptures from his own planet, indeed, from the works of one specific person; internationally renowned modern art sculptress Barbara Hepworth, who, in 1970 completed a set of nine individual bronze sculptures, collectively known as The Family of Man, from which Hurst selected and, aside from a small number of tweaks, duplicated the cast know as Ancestor 1 (see figure 7) to adorn the Dalek city entrance.

Hurst has not spoken publicly on the issue, but more than likely it was meant as a humorous comment on the then topical theories of Erich Von Daaniken who claimed that certain ancient structures and artworks from around the world depicted astronauts, space vehicles and the complex technology of extraterrestrial beings. 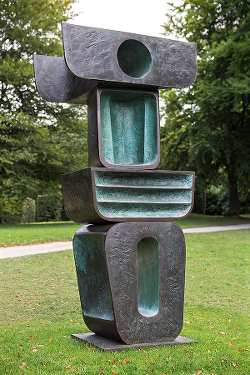 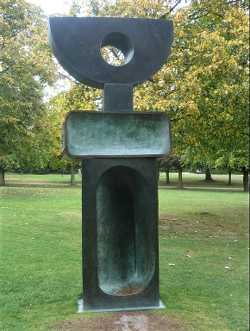 Whether Hepworth consciously based her design on a Dalek eyestick is unknown. As a trustee of the Tate Modern, she opposed the acquisition of Roy Lichtenstein's pop art masterpiece Whaam! (see figure 8), adapted from a panel drawn by Irv Novick for DC Comics, on the grounds that it was not art, but plagiarism; nevertheless, if the great Russian sculptor Naum Gabo is to be believed, Heapworth wasn't beyond a spot of 'borrowing' herself, and it's a point of interest that the final sculpture in Hepworth's The Family of Man series is called Ultimate Form and resembles a Dalek sucker arm (see figure 9). 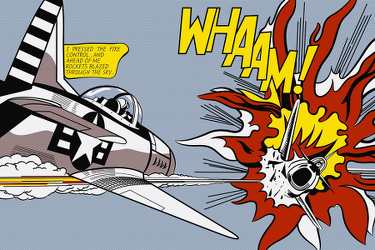