By Fiona Moore and Alan Stevens 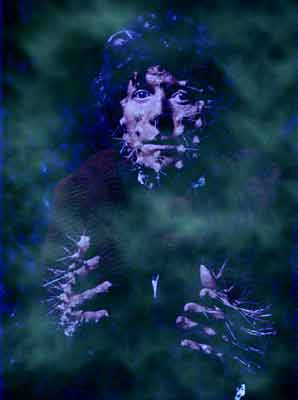 "Meglos", the second story of Season 18, came bottom of DWM's season poll for that year. In retrospect, this seems more than a little odd as, while it may not be the best story of the season, it certainly comes across as a cheerful, if patchy, comedy which manages to get a few satiric points in against Doctor Who itself.

To begin with, the title character comes across as nothing less than a satire of what is perceived as the traditional Doctor Who villain, for instance the Master. He appears to have enormous power, being able to call up the Doctor's identity on his computer, and to take over the body of a human being and metamorphose it into the Doctor (complete with clothes). Following the usual cliché for villains, he has access to a superweapon and a burning ambition to take over the galaxy; however, when the Doctor asks him why, he doesn't appear to know, saying "it is beyond your comprehension." Although he makes long, fanatical speeches, his henchmen, Grugger and Brotadac, stare in incomprehension rather than cheering him on. Add to this the wonderfully surreal touch of having him be a giant talking cactus with a name clearly derived from the word "megalomaniac," and you have a brilliant send-up of the two-dimensional sci-fi villain with absurd origins and pretensions which has pervaded the genre from the days of Flash Gordon onwards, taken to ludicrously comedic extremes.

This is further aided by the excellent characterisation of the Gaztak mercenaries Brotadac and Grugger, who seem to have more than a touch of the Terry Pratchett about them (despite the fact that Pratchett was an unknown writer at the time). Brotadac is possessed of an unthinking kleptomania and an almost psychotic obsession with Meglos' coat (of particular note is the sequence close to the end of episode 3 in which, when Meglos mentions rewarding the Gaztaks, Brotadac's hand creeps, seemingly of its own accord, towards the sleeve of the coat, and later, in episode 4, the sequence in which Brotadac actually tastes its lapel). Brotadac's cry of "She's seen too much! Keeeeeelllll herrrrr!!!" at the end of episode 2 is fantastic, as is the fact that none of the Gaztaks actually obey him. The Gaztaks in general are stunningly thick; a Gaztak guard smiles benignly at K9 without suspecting that he is about to be shot (and, considering that it also takes a rock to the head to finish him off, he is clearly a tough customer), and his fellows capture and imprison both the Doctor and Meglos in the same place, seemingly without realising that they are two separate people. We also get some brilliant exchanges, such as Brotadac and Grugger's "We've done it! We've done it! It's a complete success!" "We're taking off, Brotadac, if you want to come with us, I suggest you close the doors." "Meglos" is thus worth watching for the Gaztac sequences alone.

Where the story starts to fall down, however, is with the characterisation of the Tigellans. Tigellan society seems like something out of the more cliched late-1960s Doctor Who stories, being a future society in which people swan about dressed either in medieval robes or smart artificial-fibre white tunics, spouting info-dumps and trite homilies about the value of science or faith. Both Savants and Deons are equally one-note; in contrast to the Gaztaks, we never get much of a sense of the Tigellan characters as quirky, individual human beings (although we know that Brotadac is a vain kleptomaniac, for instance, we don't know what Deedrix does on his days off, or if Lexa has a secret weakness for practical clothing). There is also no sense of a real, developed society: where are the farmers, the plumbers, the househusbands/wives? At the same time, the writers, John Flanagan and Andrew McCulloch, do seem to be tilting the sympathy balance in favour of the Savants, as there are twice as many Savants as Deons with actual speaking roles, and Lexa, rather than getting to ride in the Tardis with Deedrix and Caris, is shot to no real purpose (suggesting that science will always ultimately win the day). It does have to be said, though, that the Deons' poor treatment as stereotypical religious fanatics, ordering human sacrifices and threatening to exile all Savants to the planet's surface, is slightly counterbalanced by the fact that it is plainly stated that the Zolfa-Thurans sacrificed themselves rather than let Meglos, a scientist, come to power. Furthermore, both groups of Tigellans have lost their most precious object at the end of the story: the Deons may have lost their god, but the Savants have lost their power source. Despite this, however, neither group comes across as anything other than a set of walking clichés.

As a side note, there is an amusing implication that the Tigellans are seen by outsiders as a poor excuse for a civilisation. Romana describes the Zolfa-Thurans as "the only viable society" in the system and Meglos remarks that the Tigellans are only using a tenth of the Dodecahedron's power. Both of these statements imply that the Tigellans, whether Savants or Deons, amount to little more than a cargo cult. In addition, there is the question of why they don't make any effort to colonise the planet's surface until the end of the story: the vegetation isn't so aggressive that a decent flamethrower wouldn't make rhubarb and custard of them.

The discrepancy between the Tigellan and Gaztak sequences appears to have three possible explanations. One is that, as in "Planet of the Spiders", one writer did the Tigellan scenes and the other the Gaztak and Meglos scenes, and the latter is the superior writer. Another, fairer possibility is that the writers felt more sympathy for the Gaztaks than for either group of Tigellans, and this shows through in the writing. The third, and most interesting possibility stems from the idea that "Meglos" is a satire on Doctor Who itself. The writers' first (and only) story for Doctor Who, commissioned mainly because McCulloch was a friend of Christopher Bidmead's, sets up the Tigellans, who, as noted, draw on the clichés of late-60s Who (as well as bearing a more-than-passing resemblance to the world of "The Creature from the Pit", with its aggressive vegetation and fascist female leaders in peculiar robes), as the antitheses of Meglos and the Gaztaks, who seem to stem more from the surreal, postmodern sci-fi of the Douglas Adams generation, which was very popular in the late 1970s/early 1980s. It is as if Flanagan and McCulloch are, on the one hand, pointing up the difference between what they see as the standard clichés of Doctor Who and the wit of modern sci-fi, and, on the other, incorporating the latter approach into the former series. This is supported by the fact that, after having given Brotadac a name which is a deliberate anagram of "bad actor," the writers were surprised when the part went to a seasoned performer, as if they associate Doctor Who with bad acting. Although the reality is probably a mix of factors, the story does ultimately come across as a form of satire of what 1980s writers- and audiences- perceived as the worst of late-1960s SF.

There are other clever touches to "Meglos". The story is nicely structured, revolving as it does around three groups of three characters (The Doctor, Romana and K9/Lexa, Deedrix and Zastor/Meglos, Brotadac and Grugger). The idea that Tigella's anti-clockwise rotation causes people to lose direction is patently a rubbish excuse made up by the Doctor in a feeble attempt to save face, but is later apparently taken as truth by the Gaztaks when Romana uses it on them under similar circumstances (providing further proof of their gullibility). The Doctor's "three

possibilities" for explaining the fact that he has apparently stolen the Dodecahedron despite having been trapped in a Chronic Hysterisis at the time include the suggestion that he is a fraud and a liar. The Deons' Italian-Renaissance-inspired costumes are really quite good (the Savants are unfortunately let down by their badly-cut and poorly-fitted blonde wigs), as is the cactus makeup on Tom Baker and Christopher Owen, and the model shots (saving a slight wobble from the Gaztak ship at one point). There is also a bit of unintentional humour when Caris appears to be staring at Meglos' groin when she exclaims, "That's impossible!" and Meglos responds, "Yes, the ultimate impossibility!" with a note of pride. Although there is a bit of continuity-referencing at the outset (with Romana being still in her costume from "The Leisure Hive", and K9 damaged by seawater), one doesn't need to have seen the previous story to enjoy "Meglos". There is also an interesting suggestion that the adventure is taking place in the present day: we hear no suggestion that the Gaztaks have time travel, but the human whom they have kidnapped is blatantly from 1980. This draws on the post-Star Wars idea that space opera need not necessarily take place in the future; like The Hitchhiker's Guide to the Galaxy, "Meglos" may feature space mercenaries and aliens, but is firmly contemporary. Unfortunately, however, we do see the return of the long recaps (episode two, far from the longest, clocks in at 1 minute 30 seconds, which also includes a 16-second Chronic Hysteresis segment; the perpetual repetition of the Chronic Hysteresis further pads out the first two episodes), suggesting that this, like "The Leisure Hive", might have been better off as a three part story.

As in "The Leisure Hive", also, we see themes of change and decay revolving around the Doctor. Baker himself does a brilliant job in the dual role of Doctor and Meglos (aided by some nicely-handled splitscreen), but again is placed in the role of evil doppelganger in a none-too-subtle indication that the production team feel the need to reassert control over the lead actor. The fact that "Meglos" was filmed after "State of Decay" means that Baker looks even more stressed and grim than in the previous story (having suffered from illness in the interim), giving the air of a sudden deterioration in his state of health since "The Leisure Hive". Again, K9 is subject to ill-treatment at the hands of the Gaztaks, and the Time Lords return symbolically in the form of the shape-changing, malevolent and ancient Meglos. Under the circumstances, the Chronic Hysteresis sequences become interestingly symbolic: the Doctor is trapped in a loop in time, repeating the same actions over and over again. Only by becoming aware of his actions, and expressing this awareness by performing the actions out of phase, can the Doctor break free. Although the Chronic Hysteresis does not make sense on a scientific level, it makes for an interesting symbol of the position of the series at this point in its history.

At the end of the story, it is ambiguous whether or not Meglos, Brotadac and Grugger will return (although the Doctor says the Dodecahedron will destroy the whole planet, Romana adds that Meglos is virtually indestructible, and also Meglos returns to the laboratory at the last minute and causes it to sink, possibly in an attempt at protection). The fact that they never did is a great shame as, although the story does have a few problems, the central villains are certainly deserving of a second chance.