That One With The Killer Robots

Alan Stevens recently asked me to jot down some of my memories of producing a fringe theatre adaptation of "The Robots of Death" and  "Storm Mine" in Manchester during the Summer of 2012. Given he’s written so many wonderful words for Vworp Vworp! in recent years, it seems only fair.

And yet, I’m finding the memories strangely elusive. 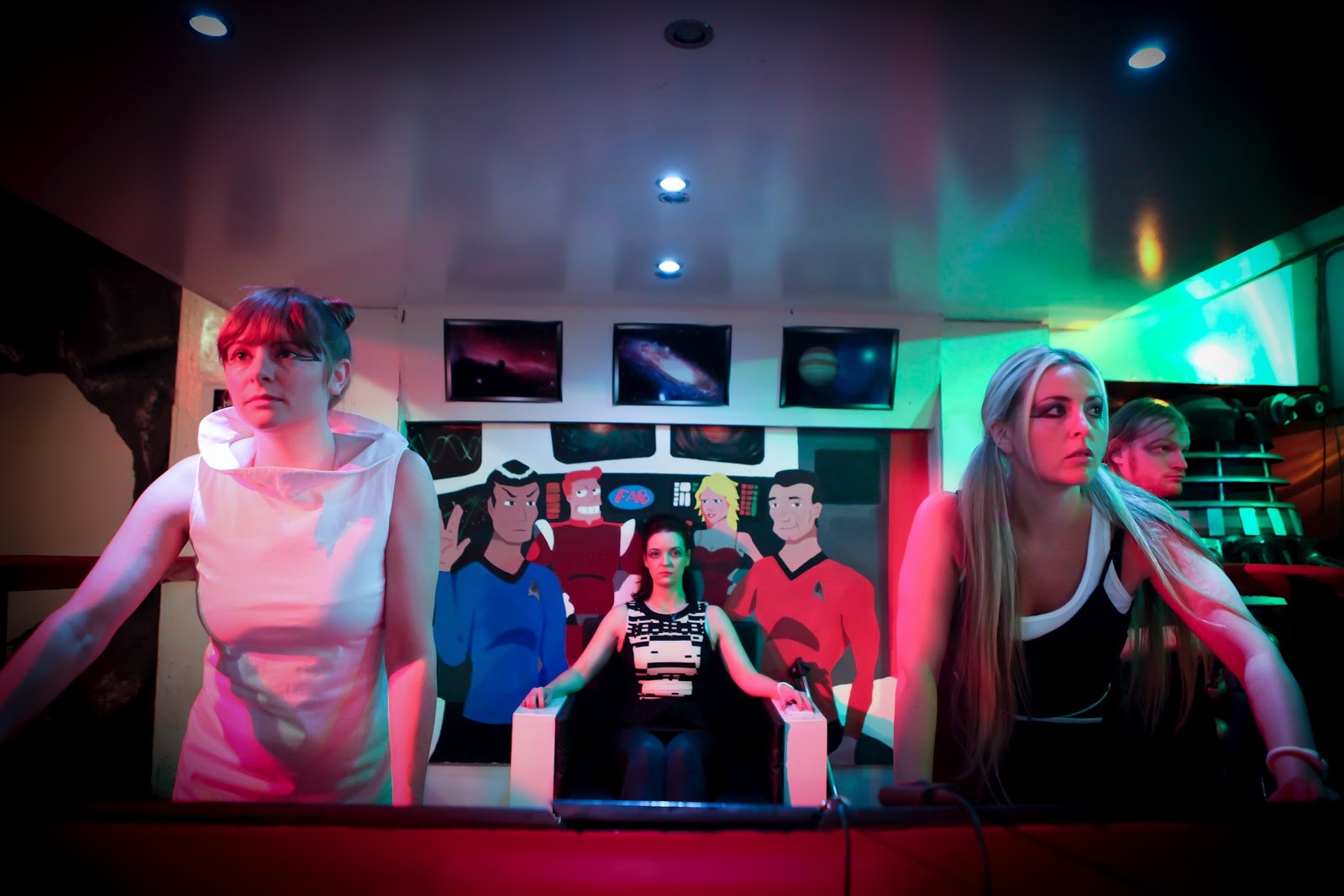 Memories, feelings, the personalities involved, acute feelings of impending failure and the soaring feeling of a success — all there. But the detail, oh that’s harder.

Like all of us obsessive fans, I used to get peeved when our heroes seemed to struggle to recall facts we’d all obsessively got down pat. No, Carole Ann, the episodes didn’t go out live, we’d all intone. But as far as she remembered, they had.

I remember asking Russell T Davies what he remembered about an encounter he’d had with Verity Lambert when SFX interviewed them both in 2005. Ever the hustler, I was looking to see if there was scope for a short play on this great encounter. After all, there must have been so much for them to talk about?

We were both to be disappointed. 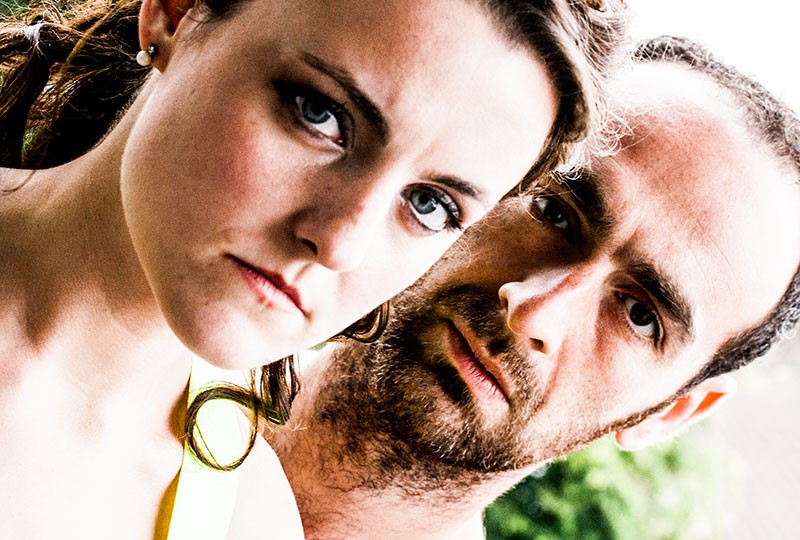 Russell said he’d been burning with curiosity about those early days. What was it like walking into that office as a woman? How hard was it to get it on the air and keep it there? What were the offices like, the people, the haute couture? Verity, he remembered looked at him, lit a fag and slipped straight into the comfortable groove; “of course Sydney was FURIOUS! No bug eyed monsters." It was as if, he remembered, she’d just become a collection of anecdotes. And the worst thing is, I’m becoming the same, said Russell. Every story’s getting more polished, more elongated to fit the laughs. Edited, curated, before finishing with the brutally honest reposte of ‘I’m even beginning to doubt my own recollections now.’

As so it goes for me and Robots of Death. I feel in good company with Russell, Carole Ann and Verity and I hope you do too, those of you who can’t remember what you did last Tuesday, but can still rattle off story codes for fun. So be kind, and I’ll see if I can take you back to that balmy happy Summer of 2012.

You can have all the ideas in the world, but strictly speaking, it starts with a script, or to paraphrase Clinton’s 1992 Presidential campaign; It’s the script, stupid!

Again, it’s something I used to roll my eyes to as a younger fan when the importance of having a great script comes up, but like most of these things that annoy our younger selves, it also happens to be true.

I’d just finished producing a successful season of drama at my old theatrepub, the Lass O’Gowrie, in January 2012. I was on a real high. The Ballad of Halo Jones, Hot Fat and Coronation Street 1968 had all achieved great audiences and critical success. Against all odds, this blend of populist TV adapted drama had found an audience in the converted manager’s lounge of a back street boozer during a viciously cold Manchester winter. Most popular of all though, arguably had been a staging of Russell T Davies’ "Midnight". 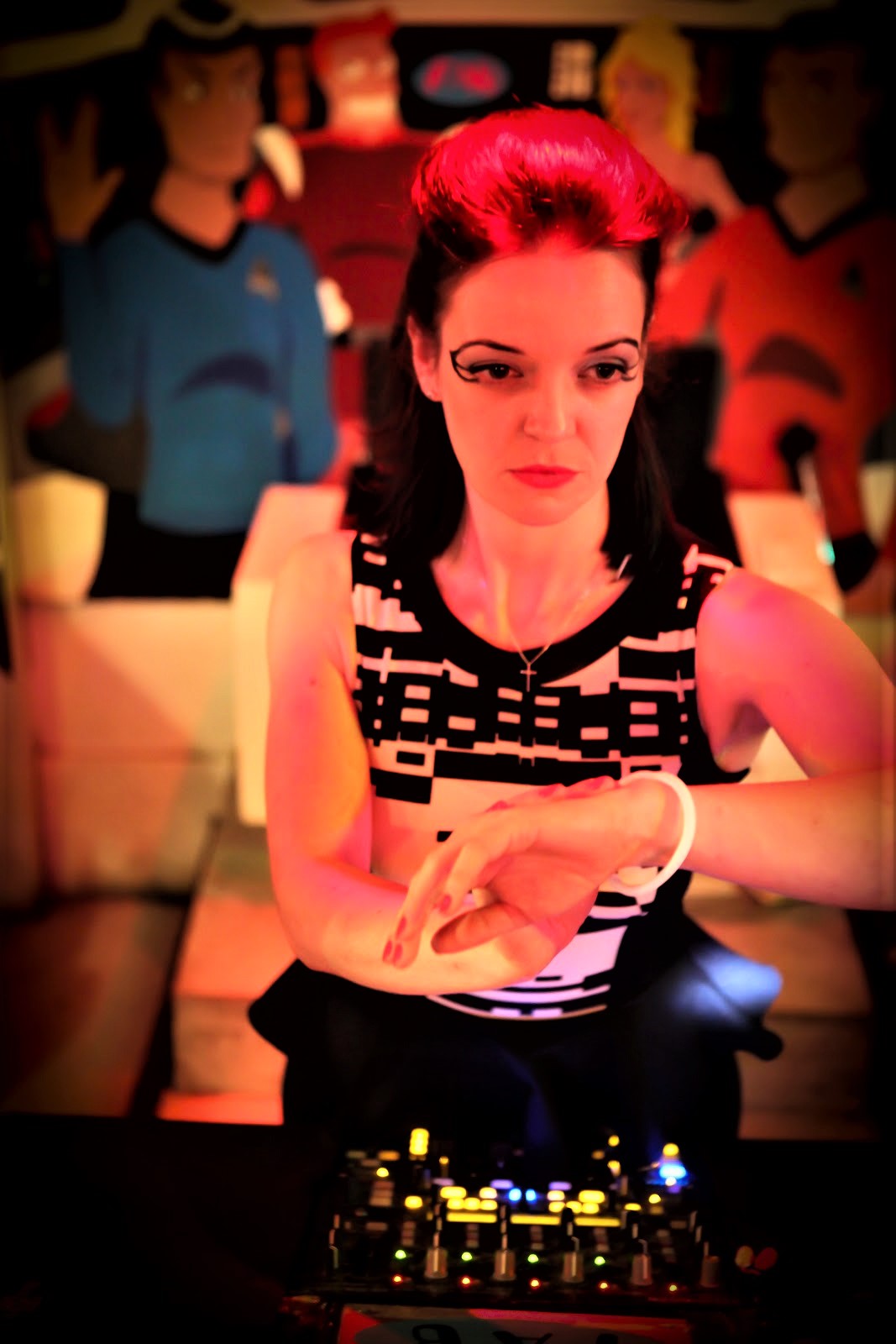 Produced with Russell’s permission as a one-off, Midnight really was the perfect script for a fringe play in a single room. Tight, claustrophobic and best of all, almost completely free of BBC owned baggage. The Doctor is referred to as John Smith throughout, Donna is absent as is the Tardis. We approached it as a drama, a sci-fi infused Play for Today with a dogged determination to keep it accessible to a broad audience. The staging allowed only 25 people a performance and we did five or six shows, then that was it. An amazing experience all round and one that made me think about what else we could try.

It really began to click driving home from Wales in the February. I’d grabbed a CD for the car off the pile and it turned out to be "Storm Mine", the last in Alan Stevens’ excellent Kaldor City series of dramas. It’s a complex tale of a haunted Storm Miner lost in the desert, with major plus points being a small cast and an extremely literary script by Daniel O’Mahoney. In particular, V23’s Tree of Flesh dream that haunts him really stuck in my mind as some of the best writing I’d heard for some time.

Then I remembered. I had Chris Boucher’s rehearsal scripts for "The Robots of Death" somewhere. I’d bought all four scripts in the early days on Ebay off Chris in 1999. Oh, Ebay was a glorious place back then before the tourists discovered it. Full of treasures and wonders. And these four scripts were amongst the brightest of all the jewels I ever unearthed. They dated from 1976 and although mostly faithful to what we saw on TV, they did have some fascinating differences. From memory, there’s an extra character, Jan, who dies fairly early on. There’s also a line explaining that D84 has no protocols in places constraining his actions, as opposed to the other Vocs (if only Taren Capel had known!) and a lovely note from Bob Holmes adding the line that the Doctor thinks D84 is very important, as opposed to these drafts where he is essentially seen as dispensable. 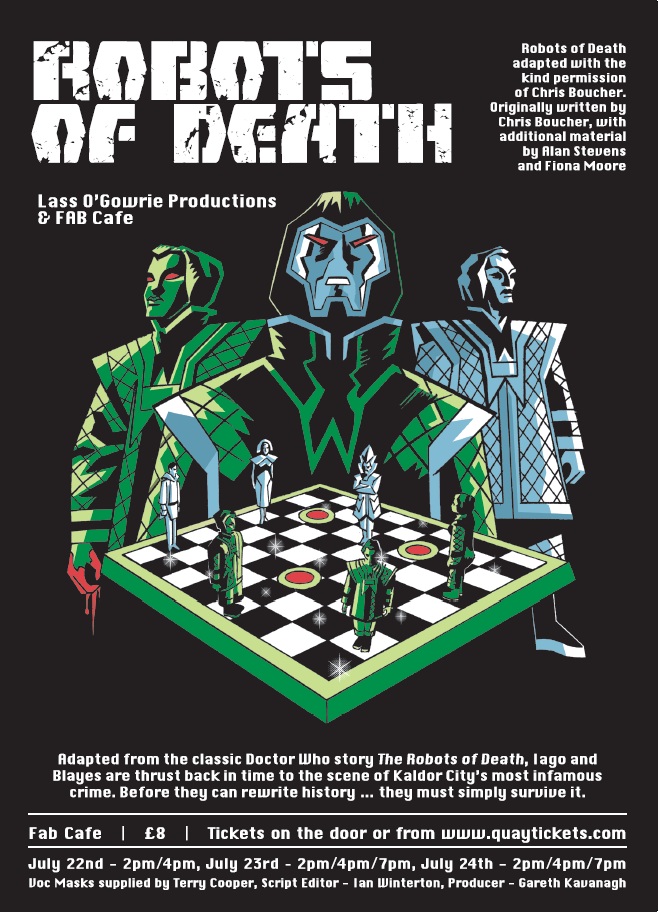 All fascinating stuff, but what about the Doctor and Leela? The BBC own those characters, making a fringe adaptation problematic from a permissions point of view. With this in mind, I began to think about whether Alan’s Kaldor City protagonists Kaston Iago and Elska Blayes could fill the Doctor and Leela-shaped hole in the plot.

Alan agreed it could, although the scripts would need some serious adaptation beyond the obvious cut and paste, all of which he was willing to undertake. Chris Boucher was equally supportive and, with this double stamp, we were ready to go with Robots of Death scheduled for Fab Café with Storm Mine following two weeks later at the Lass O’Gowrie.

It’s fair to say I was pretty giddy with excitement. Inside, ten year old Gareth was punching the air while 39 year old Gareth was looking forward to bringing these superb scripts to the stage. It’s as happy as I ever felt, looking back on this project.

With Alan's stage adaptations of both stories completed, all we needed were directors and a cast.

In the space of two years producing twenty-three plays at the Lass O’Gowrie, I encountered a lot of directors. Most had their merits, all had their strengths and the work was usually good, even if the working atmosphere of turning round things so quickly was often fractious. However, I think it’s fair to say I’ve only ever had one director just vanish on me before or since, although with writers and scripts this is more common. 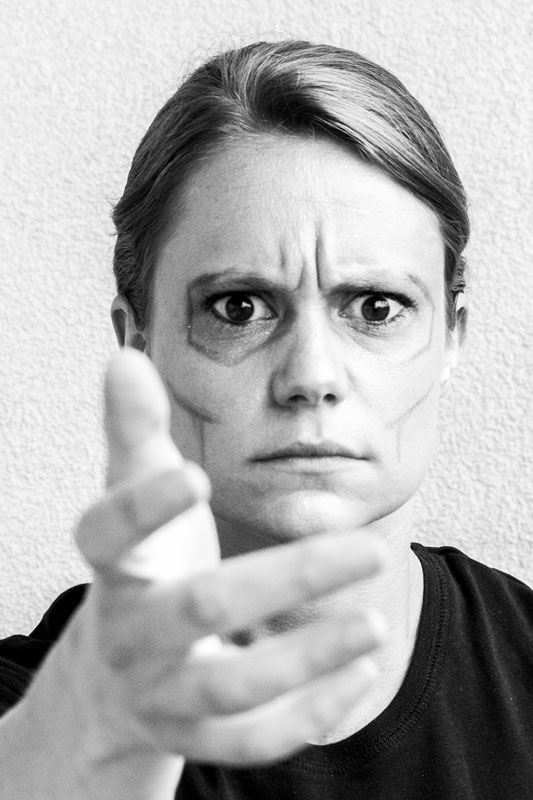 Sam Al Hamdani was assigned Storm Mine and I can only lavish praise on what he managed with the production. Sam delivered a taut psychological drama that was well rehearsed, beautifully cast and thoroughly nuanced. The performances were uniformly excellent and Morag Peacock as V23, in particular, was utterly perfect. Oh, how glad I am we archived her Tree of Flesh monologue. Her career has since progressed with leaps and bounds and it’s no surprise. Audiences were appreciative, debating the various reads and meanings of the script in the bar after. This is as proud as you can ever be as a producer.

Then there was Robots of Death, the prestige big cast, big budget fringe piece to Storm Mine’s BBC4 drama. The original director for this arrived with plenty of enthusiasm and seemed to have a clear idea of what he wanted. He also demanded a closed period to work with the cast, who we’d put together in the same casting session as Storm Mine. With hindsight, I should have heard the alarm bells ringing, but there was so much to do. I had six other productions to prep and an awful lot of the producer things to do for this. 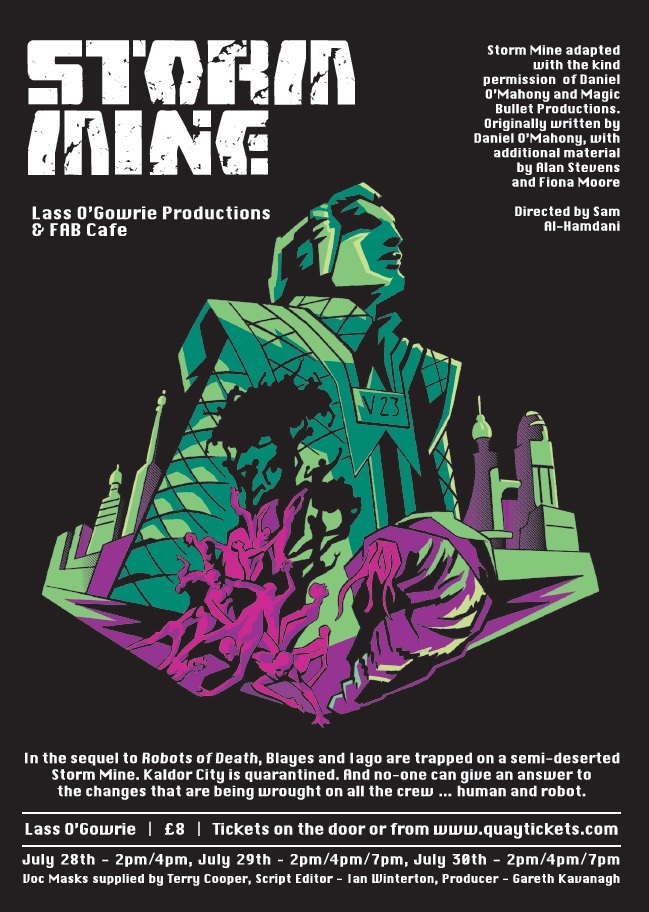 Adrian Salmon was assigned to provide art for both posters, while six Voc robot heads were commissioned from master sculptor Terry Cooper. Money and resources were being committed, the most important of which was a special script in hand performance of both productions at a launch event with Paul Darrow and Tracy Russell reprising their respective roles as Iago and Blayes in front of a live audience at Fab Café. This was seriously exciting stuff.

All of which kept me very busy. So busy, in fact I probably was less worried than I should have been that the director had gone quiet on me. In fact, it was only when I bumped into one of the cast in town and asked how it was all going that I realised how bad things were.

You have those moments in all walks of life where it dawns on you that you’re buggered. In Doctor Who terms, it’s Morgus having his chat with Krau Timmin midway through "The Caves of Androzani" Part Three.

My Krau Timmin moment was being told by a now ex-cast member that they’d had no rehearsals for the past month, the director wasn’t returning any calls and most of the cast had moved on.

I felt like being sick. However, you have to regroup and continue.

The first thing I did was to call the original director and remove him from the project. The second was to contact Sam Al Hamdani and ask for help with the now rapidly approaching Paul Darrow event. Sam took over and we dragooned some of our fringe pals to fill in. Luckily, Paul has such star quality that the audience saw nothing amiss. First bullet dodged. 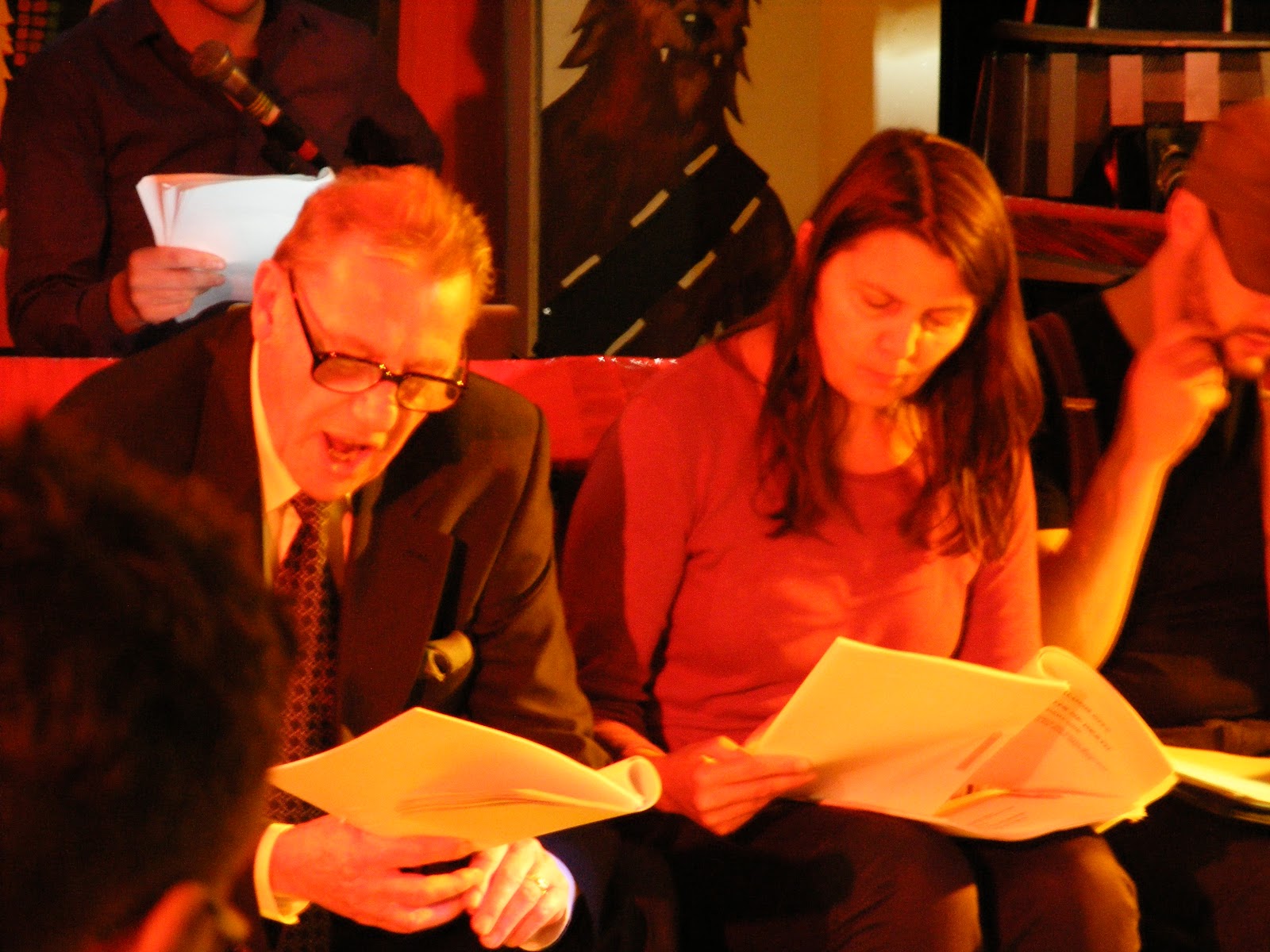 Second, I needed to urgently see who I still had in the cast (a very large cast, unhappily) and see where we could fill in the gaps. We had less than half remaining, not so good. Then we had our first break. Ian Winterton proposed regendering the crew to make it almost exclusively female. This was primarily a practical consideration, given that the fringe scene has so much young female talent at its disposal. Beyond this though, it also gave us a completely new perspective on the scripts, freeing us from the genius of Hinchcliffe et al’s masterpiece from our collective youth.

It was this one move that probably saved the play.

The other factor that contributed enormously was getting the right director. Kerry Ely stepped in with two weeks to go and how she managed it, I’ll never know. The cast was still far from complete, but they went for it with gusto and passion. In fact, we only added Chub the day before curtain up with D84 (the wonderful Jess Lee) joining us for the first time on the day of the première. 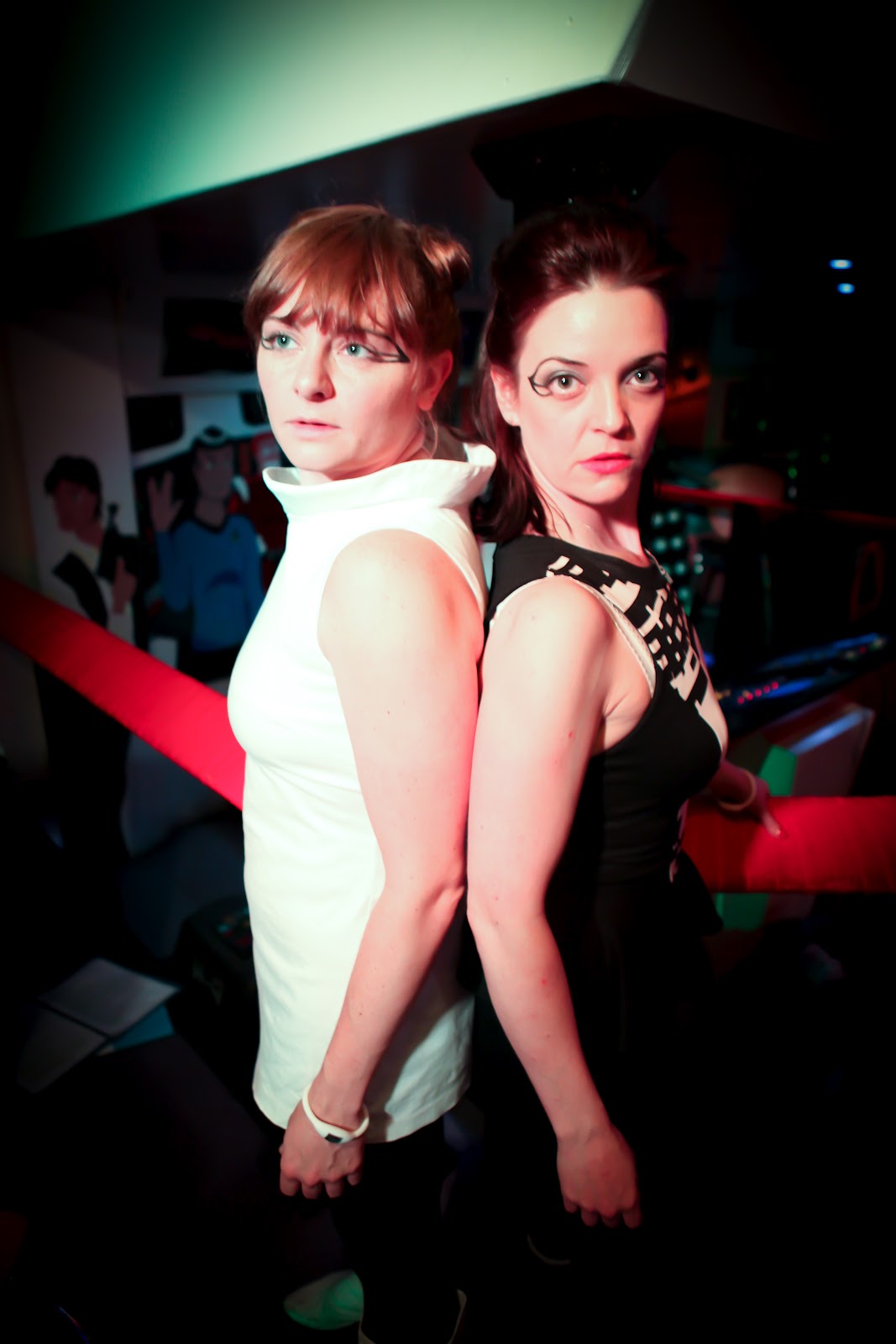 Looking back, Kerry made a lot of bold and intuitive decisions.

By instinctively reaching for a B-movie, almost Return to the Forbidden Planet-esque staging, she gave us our ultimate get out of jail card. The audiences lapped up the sci-fi tropes and witty scripts Chris and Alan had delivered between them. The cast, sensing this was the route out of the bad hand we’d been dealt, really played along, with Leni Murphy’s un-rehearsed valley girl Pilot Toos stealing all the scenes and the reviews too.

Against all the odds we had a four star show.

Robots of Death sadly never returned. I think the exhaustion of staging and the tightness by which we escaped complete farce probably made it the right decision.

But it was wonderful too, looking back.