by Fiona Moore and Alan Stevens 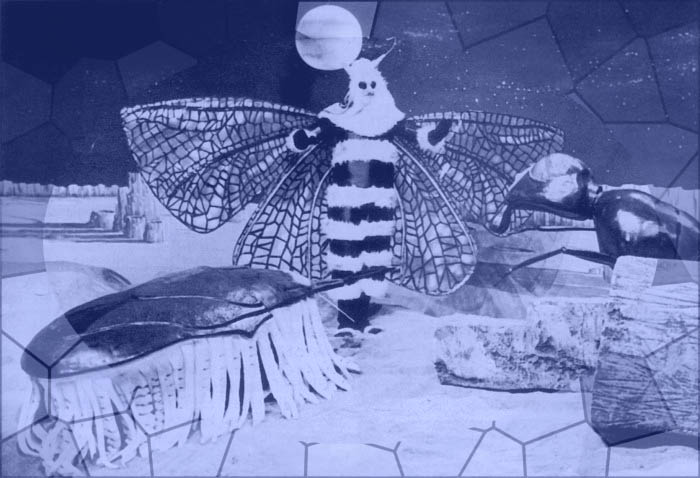 "The Web Planet" is a story which, on the face of it, has a lot going for it. Made during the initial period of development of the series, a time known for its liberal innovation and clever use of subtext, it involves William Hartnell, Verity Lambert, Martin Jarvis and a number of other respected performers and production team members, and garnered very high ratings on its first broadcast (although the audience appreciation index gradually fell from 56% for episode 1 to 42% for episode 6). The fact that it has come in for subsequent criticism should not necessarily make a difference; many stories which were once poorly regarded are currently undergoing reassessment. Unfortunately, while "The Web Planet" is not the worst serial to come out of 1960s Doctor Who, it is far from the best, due largely to inconsistencies of writing and production. 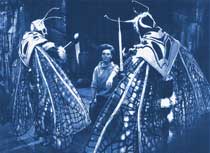 First of all, it has to be said that the periodically-mooted suggestion that "The Web Planet" contains some kind of deep subtext obscured by the confused circumstances of its production, unfortunately, doesn’t read. While Dennis Spooner tried, in an interview quoted in Doctor Who: The Sixties, to claim that the story was actually a metaphor for Communism (the "ants") versus Free Enterprise (the "butterflies"), this doesn’t actually work in narrative terms-- leaving aside the problematic equation of Free Enterprise with pretty, frivolous-looking insects that waft about sipping nectar-- first of all, because the Zarbi are stated explicitly to be brainless, cattle-like animals (suggesting a rather racist view of Eastern Europeans, Chinese, Cubans, and other members of Communist states), and secondly because the Menoptera don’t really give much sign of being particular supporters of free enterprise; indeed, by the end of the story, we have no real idea of what, if any, sort of politico-economic system that they favour, beyond the fact that they have a concept of military organisation (which is hardly unique to democratic, free-market states). It is tempting, reading the initial setup, to develop some kind of ants=workers, butterflies=artists, maggots (i.e. Optera)=criminal lowlife equation, but this isn’t carried out in the story, as the Zarbi aren’t particularly industrious, the Menoptera aren’t particularly artistic, and the Optera (who aren't technically maggots anyway, but trogloditic Menoptera) don’t really seem to do very much at all. It is true that the Animus, as a "spider," does weave webs and engage in social control, but at that it isn’t particularly clever or secretive. The resemblance to different insects (and/or arthropods) seems to be more for ease of classification and development of choreography, but, since no particular narrative use is made of their appearance, all we really get in story terms is the tale of a group of aliens, whose planet is taken over by another alien, and who then take it back with a bit of help from the Tardis crew.

Some explanation for the relative simplicity of the story and complicatedness of the production can be gleaned from what we know of its development. According to the A Brief History of Time (Travel) website, Verity Lambert and outgoing story editor David Whitaker commissioned "The Web Planet" from Bill Strutton without seeing a storyline first; had they done so, they might have vetoed it, or at the very least worked with Strutton to develop it into something more interesting. Further complications, famously, came when (according to the abovementioned Spooner interview) all the different production departments started trying to outdo each other rather than work together, with the consequence that, while there has clearly been a lot of work put into the sets, costumes, makeup, effects and so forth, they never quite seem to gel together into a seamless whole. The result is that some of the scenes are quite brilliant taken on their own as set pieces-- the part where the Doctor and Ian look up at the huge pyramid-shaped monument and speculate on its purpose, for instance, or the first appearance of a Menoptera-- but at the end of the day, there isn’t much of a sense of connection between these moments.

Consequently, what we have in "The Web Planet" is a serial which manages to get away with it, as it were, for about two episodes on sheer strangeness alone. There is something eerily compelling about the images of the lunar landscape populated with giant insects, Barbara seemingly becoming possessed, the Tardis losing power, and Ian and the Doctor encountering strange monuments. However, once the narrative actually has to settle down and deliver a story, what we get is really rather simple and not too imaginative. It also suffers from some problematic direction, for instance the number of scenes which begin with an empty set, followed by a brief moment of some Zarbi, larvae guns etc. running through the set, followed by a further stretch of nothing happening, apparently intended to indicate "action". The overambitious nature of the production of "The Web Planet", and consequent need to cut corners and desperately avoid overtime, leads to some inadvertent visual hilarity, such as the Zarbi who runs full-tilt into the camera (every bit as good as the Voord tripping over its flippers in "The Keys of Marinus") and the larvae-gun apparently running along on wheels. Although the viewer starts out by admiring the production, by the third episode in the problems become clearly apparent.

Furthermore, whatever Bill Strutton may or may not have said about the story being inspired by his being struck by the resemblance between two bull ants fighting and his stepsons brawling, the story evidences a clear debt to the 1964 film version of H.G. Wells’ The First Men in the Moon, which features a Victorian scientist and his companions exploring a desert Lunar landscape inhabited by insectlike creatures, the intelligent ones being dwarfish and antlike, and their "cattle" being rather caterpillar-like. There is even a sequence in the film in which the female lead looks out of the spaceship at the landscape as the ship is picked up and carried off by insects, which is paralleled by a near-identical scene in "The Web Planet" involving Vicki and the Tardis scanner. The somewhat inexplicable Episode 5 cliffhanger, in which the Doctor and Vicki are covered by webs (which appear to paralyse them only briefly, and which are never used at any other point in the story, even when they might have been reasonably useful), is also foreshadowed in a scene in the film in which we see aliens covered by cocoonlike webs. While some Doctor Who stories have borrowed heavily from well-known films or film genres of the time and got away with it, this one never really does anything new or original with the concept.

The general sense that "The Web Planet" consists mainly of ideas which are good, but disconnected, can also be seen in the costumes and characterisation. Seen from the shoulders up, the Menoptera are quite striking, with beautiful makeup and headpieces. Unfortunately, the decision to give them portly bodies with furry horizontal stripes (which were, apparently, yellow) gives them an unfortunate resemblance to that Mexican wrestler who dresses up as a bee on The Simpsons. In fact, the team in general seem vague on what sort of insects they are meant to resemble: the similarity between their name and the word Lepidoptera, and Strutton’s remarks quoted earlier, suggest that the original idea was to have them be butterflies, but the costumes tend to suggest bees instead, and at one point one of them is attracted to the light of the Animus like a moth. Similarly, the idea of giving them insectlike, alien body language is a good one in principle, and the actors get quite into it (dying with their limbs folded, breaking off in the middle of a sentence to continue the thought with gestures, etc.), but in practice, the stilted speech and exaggerated gestures periodically remind one of children’s presenters, dressed up as bees and maggots in a bid to educate young viewers about the diversity of the insect world. The larvae guns (which, it turns out, are only called "venom grubs" in the novelisation, in another instance of apocrypha becoming included in the canon through popular usage), look cool, sort of like a cross between a woodlouse and a weevil, and the idea that the Zarbi are quite different in larval form to their adult abilities and appearance is in keeping with the general nature of the insect world. However, oddly, they look more like adult insects than grubs, where the supposedly-adult Optera are rather more grublike. Finally, the atrophied wings and hypertrophied eyes on the Optera are a nice touch, following the idea that they are Menoptera who have become adapted to an underground life, but they don’t really contribute much to the story beyond some alienesque dialogue in impenetrable accents, and guiding Ian and Vrestin through the tunnels (which isn’t really essential in plot terms). There is a partial implication that, under the predatory influence of the Animus, the remaining Menoptera became stunted, grublike and stupid, but the idea is not really well-developed, or even brought out into the narrative.

The science in "The Web Planet" is also problematic. In general, we tend to maintain the view that lack of scientific accuracy in Doctor Who is not usually a problem, so long as the principles, flawed or otherwise, remain consistent throughout the story. In this case, however, the science does not even remain consistent-- one minute gold is something physically attracted to the Animus, the next it is something the Animus uses to control the minds of its victims, with no mention of the earlier physical-attraction tendencies (and, to be honest, the idea that gold is a magnetic metal is pushing the limits of tolerance for scientific inaccuracies). The Doctor’s signet ring also keeps cropping up throughout the story as a kind of magical plot-device object, and, while this is not necessarily a problem in Doctor Who terms (q.v. the sonic screwdriver later in the series), it would be nice to have had some kind of pseudo-scientific explanation for how it is that the ring has suddenly developed all these powers. The scene where Barbara and Vicki talk about the practice of education in Vicki’s home time is also less than brilliant: the idea that Vicki studied medicine at the age of ten is an amusing extrapolation from the way in which, as science advances, things once considered cutting-edge are demoted to more basic levels (aspects of present-day secondary-school calculus were university-level many years ago), but the idea that future children would learn for an hour a day through a computer was already a cliché by 1965, and it’s a little surprising that, if Vicki is so well-educated, she wouldn’t know that aspirin is a basic painkiller.

"The Web Planet" has, however, made one major contribution to Doctor Who, in that elements apparently lifted from it have been put to more interesting use in later stories: "The Abominable Snowman" and "The Web of Fear" (dumb creatures, or, in this case, robots, controlled by a static alien Intelligence with a great voice and a fondness for spider-webs) in the old series, and a number of episodes of the recent Christopher Eccleston series ("venom grubs" being mentioned in "Boom Town", the Isop galaxy being apparently the home of the Face of Boe, and the year 200,000 AD, the setting for "The Long Game", being suggested in the novelisation of "The Web Planet" as a possible time for its taking place, and "The End of the World", depending on how one views Cassandra, depriving "The Web Planet" of its status as the only story to feature no human characters outside of the Tardis crew). Otherwise, however, it is only really worth a second look as an object lesson of how not to do Doctor Who in the 1960s.