The man behind the mask talks to Fiona Moore about being more popular than Peggy Ashcroft, working with the wretched metal dog, and playing a different sort of robot in Daniel O'Mahony's Kaldor City audio play, "Storm Mine."

How did you get into acting? 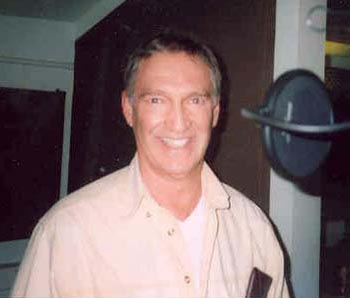 There were two influences. First, I saw Laurence Olivier, who was a great influence on my generation, playing Richard III in the cinema, and I went to see it when I was about twelve, or thirteen at the time, and I remember thinking, "My god, this is wonderful". After that, I suppose I progressed into acting through the drama society at school; I think I was about seventeen when I realised that I could really do it. Though I always liked English Literature, and I've always liked speaking aloud and reading aloud. Then I left school, and finally, when I reached the age of twenty-one, I got a job working in a children's theatre company, and from there I finally went to drama school. Following drama school, I was an actor for about twenty years full-time. I stopped acting after my accident.

Can you tell me about that?

Yes. I was doing a lot of teaching and directing in America, and I had a very bad fall. I broke my hip, my pelvic girdle and lots of other stuff, and I had to give up acting for quite a while, so I retrained as a voice teacher and I ended up running lots of voice departments in drama schools. Every now and then, people remember me and wheel me out of retirement, for a spot of acting. I also run my own training company, teaching people to do voice-over work.

How did your involvement with "The Robots of Death" come about?

Well a mate of mine was the director on it, Michael E. Briant. And we used to meet up a lot; we were sort of neighbours really. And he said, "I've got this part, I don't know how you'll feel about it, but you'll be wearing a mask the whole time," and I said, "Listen, it'll pay the mortgage for a few weeks, so I'll go for it." Well, I ended up playing the robot D84, which for some reason has become this cult figure.

What do you remember from the recording of "The Robots of Death"? 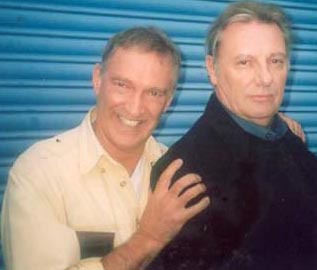 I remember it was a very uncomfortable shoot! We wore these masks that absolutely reeked of paint, and we had to wear these strange boots and wobble along, and we hadn't rehearsed any of this in these bizarre costumes beforehand.

How did you get on with Tom Baker?

I was rather lucky. Tom was passionate about crosswords, and I was hopeless at crosswords, but I somehow always seemed to know the one he never could get. I remember we had one where it was to do with some Buddhist text, that was the clue, and I just meekly said, "Upanishads," and he was very impressed. I became part of his inner circle for a while, but when I stopped being so good at them, or I couldn't answer them, he started to be less interested. I think by the end I was no longer part of his coterie, but to start with, yes, I was quite a part of it!

I understand that the relationship between Tom Baker and Louise Jameson was a bit strained?

Yes, it was a bit, I don't think it's any secret that things were a bit awkward between them, but I thought she was very nice, very lovely. I always remember sitting next to her and seeing these extraordinary eyes, and I said, "God, you've got beautiful eyes," And she said, "Oh, no, they're contact lenses"! I seem to remember that the whole crew were great, and there were people I'd been to drama school with and other people I'd been working in the theatre with. In fact, Pamela Salem and I had been in weekly rep together, as very junior members of the company. One moment you were cleaning the floor, prompting, and then walking on and acting, A real baptism of fire! So I found Doctor Who a rather fun four weeks to do. I remember it with great affection.

How would you characterise D84?

When playing D84 my face was covered, so the characterisation was really all done with the voice. I remember reading the script and finding this wonderful line that D84 had about plucking crystals from a snowflake. What an unusual line for a robot to say! I seem to remember we decided that this robot had a different mind to the others. He was a special detective, of course, who had disguised himself as a Dum, labour grade robot, but obviously he was really quite advanced, even though he was dressed down. I think it might have been me who suggested that D84's voice should have a slightly poetic, ethereal, quality about it, being that he used language so well.

I know the robot voices were done live, but was there any dubbing afterwards?

Yes, there was. We did it live first so the other actors would have their cues, but then we had to dub it over again, because, as you can imagine, we were speaking through these masks, and we didn't have any individual microphones. I seem to remember putting this polystyrene cup over my mouth during the dub, so as to try and get the same effect. It was terribly primitive. Though when I think back, we used to do two episodes in a day and a half, which was amazing.

Apparently there was a suggestion that D84 should become a regular companion.

Oh, yes, there was certainly talk at the time of resurrecting D84 and having him travel with the Doctor. I mean, yes, D84 was blown up, sacrificing himself to save the Doctor, but being a robot, they could have brought him back. I don't know why he didn't return, it was probably politics at the BBC, and then they got in that wretched metal dog instead, so that was the end of D84; crawling along the floor to his own oblivion, calling out, "Goodbye, my friend."

Did you see the story when it was first broadcast?

No, because my young daughter was so terrified of it, I had to turn it off. It wasn't until many years later, when I was approached to do a programme called I Was a Doctor Who Monster and they kindly sent me a copy of the video, that I saw it for the first time, twenty-odd years after I first did it.

When did you find out that D84 had become this cult figure?

Well, when I started getting letters from barmy farmers in New Zealand who wanted my autograph! Then when I was in America playing Malvolio, working at the RSC and with two major British Oscar-winning stars, Dame Peggy Ashcroft and Ben Kingsley, there would be these huge queues lining up outside to get my autograph! And it had nothing to do with my Shakespeare, but the fact that I had played D84. Can you believe it? I've also had students who, once they know I was in Doctor Who they become sort of groupies. You know, I mean serious classical acting students at drama schools. They didn't see it the first time round, they saw it on video, and I've had many of them gasp at the idea that I was D84. It's really quite amazing!

How did you feel when asked to come back and play another robot for "Kaldor City: Storm Mine"? 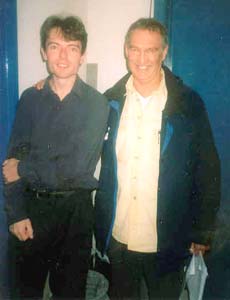 Well, it came completely out of the blue. I was working with a group of American students, because I direct and teach for RADA, and I got this message saying, "Will I phone this number," and so I rang, and Alan Stevens, the producer, answered and said, "I've got something that might interest you." He wanted me to play a new robot called V23. So, I looked at the script and I thought it was very intelligently written, and this character V23, although they wanted the same kind of voice, was a much more advanced robot than D84. V23 has a very interesting mind, very interesting. And of course, as a result, I ended up working with the voice of that wretched metal dog! Though I must say, I do prefer John Leeson to his alter ego. Paul Darrow and I were also reminiscing- we did a Dixon of Dock Green, where I used to be a regular, about thirty years ago, in 1973. So yes, it's good to be back playing another robot.

Well, I think the point is that D84 was very much a sidekick to the Doctor, whereas in this story, V23 is very much his own man, or perhaps I should say, his own machine. V23 is a much more sophisticated robot, and I also think that he is terribly well written. I have to be honest, V23 is a much more rewarding role, and I'm looking forward very much to hearing the finished production.

Finally, how do you feel the production went?

It was great fun. As I've said, I spend all my life now teaching and directing, so it's great fun when I do a bit of acting again. In fact, after this I'm going on to do a movie. I'm glad I'm not a full time actor anymore. But I love it.

This interview has previously appeared in Celestial Toyroom Issue 321.